Dumbwaiters are a practical, convenient and time-saving household feature, but they have not always looked the way they do today. While today’s dumbwaiters resemble small freight elevators, these cargo conveyors once had a very different appearance. In this guide, we’ll discuss some surprising facts about dumbwaiters and how they became the useful home helper they are today.

Modern dumbwaiters for home use are small lifts that have an electric operation to move goods between floors. Their design makes them too small to carry people, and you must discourage children from attempting to ride in them. However, for moving groceries, books, meals and more between floors, nothing beats the ease of filling a dumbwaiter and pressing a button.

Some models, though, still use pulleys and hand-drawn ropes to move the dumbwaiter and its load between floors. These older, manual models often appear in older homes. Some people restore their homes with manually operated dumbwaiters to preserve the historical integrity of the property, but others may upgrade these models to electric. The mechanical operation of a manual dumbwaiter makes moving the cargo between floors more manageable, but it still requires extra effort that button-operated electric dumbwaiters don’t. Older dumbwaiter lifts could slip, disrupting the load in the car. If you had a plate of food, a dumbwaiter mishap could cause a lost lunch or toppled beverage. The dumbwaiters in today’s homes have numerous safety and convenience features not seen in older models.

However, dumbwaiters were not always this convenient or easy to use.

The History of the Dumbwaiter

This design for the dumbwaiter has come a long way from its humble beginnings as a simple hoist in Ancient Greece. To fully appreciate the modern dumbwaiter, you should take a walk back through time to see how this device has evolved throughout the centuries:

The first dumbwaiter dates back to the Ancient Greeks. These lifts used a series of winches and pulleys with ropes pulled by strong men to move the load. Ancient Rome took the idea to the next level to move animals and gladiators to the fighting arena floor in the Colosseum via 24 lifts. The men required to operate these lifts numbered in the hundreds.

Over time, these hoists developed into elevators used to transport people and goods.

How Jefferson Made These Household Helpers Popular

In the 18th century, Thomas Jefferson, a Francophile, brought many innovations from France and the rest of Europe back to the United States. Among these was the French’s use of dumbwaiters during dinner parties.

However, the dumbwaiters adopted by Jefferson did not look anything like today’s versions. Instead, these models were more of a portable serving stand. Hosts would replace their servants at dinner with these mobile stands that included all the foods for the many courses, from appetizers to desserts. In Paris, Jefferson could host up to 20 people with the help of five of these dumbwaiters.

This piece of furniture may have remained as an archaic dining piece in Europe had Jefferson not brought the design back to the United States. At Jefferson’s estate of Monticello, he had five dumbwaiters in his dining area.

Among the dumbwaiters that Jefferson owned was a particular model that one guest described as a spring-loaded turning shelf between the kitchen and dining room. The device allowed the kitchen staff to put food and beverages into the dumbwaiter, then turn it so it would appear in the dining room for Jefferson and any of his guests. After the meal, the guests would put their empty plates on the dumbwaiter, and it would revolve back into the kitchen. Jefferson employed such a model at the White House during his presidency, as well.

The use of a dumbwaiter at his estate allowed Jefferson privacy and the chance to entertain his guests without servants distracting the meal. At the White House, the ability to host a meal without servants became a matter of national security. The president could discuss sensitive issues at meals with his guests without worrying about servants who may spread gossip about the discussions. With the Revolutionary War still in recent memory, along with the espionage that occurred during it, the nation’s leaders had reason to fear open ears.

The name for the dumbwaiter likely came from its ability to act as a silent servant, using the outdated term “dumb” for someone who does not speak.

Spinning shelves to move food between rooms was not the only dumbwaiter innovation Jefferson made at his home of Monticello. He also had a lift mechanism to bring bottles of wine from his wine cellar to the floor above. The lift used weights and pulleys to move a load of wine from the basement up to the dining room. At the end of the meal, Jefferson could put the empty bottles back into the dumbwaiter and send them down to the cellar for reuse. If he had sent an empty bottle down during the meal, a member of his staff would likely replace it with a full bottle to return to the dining room.

Though the first patent for dumbwaiters would not appear until the late 19th century, several homes of the well-to-do used variations of this device until then.

For example, in Thomas Edison’s home of Glenmont, the floor plans showed a dumbwaiter in the home’s design. This mechanical model lasted until 1944 when the Edison family converted the space into a passenger elevator as a convenience for Mrs. Edison in her later years.

Later, the space underwent renovations again to become a return air shaft. In 1931, an appraisal report of the home described the dumbwaiter as a pine car measuring two-foot by two and a half-foot inside a four-story shaft with a guide rope. The Edisons likely used the dumbwaiter to move coal and firewood from the cellar to fuel the fireplaces and stoves in the floors above.

Though the mechanical dumbwaiter Jefferson used at Monticello was futuristic at the time, it didn’t take off in popularity until the end of the 19th century when the first patent for a dumbwaiter appeared.

In 1887, George W. Cannon filed the first patent for a mechanical dumbwaiter operated by pulleys and weights. This design featured a counterbalance weight to help the car move vertically. Pulleys at the top of the shaft and attached above and below the car increased the length of the rope, which reduced the effort needed to move the dumbwaiter. Thanks to the introduction of the mechanical dumbwaiter, multi-story homes and apartments could have easier deliveries between floors. This device’s use also became a boon to restaurant workers of the time.

In an era when restaurant kitchens or pantries occupied different floors from each other and the dining area, dumbwaiters could safely convey food without workers tripping on stairs. To operate, these models required someone to shout what they needed down the shaft. The person below would fill the need and hoist the dumbwaiter car. Unfortunately, these dumbwaiters got such heavy use that the ropes would stretch or slip off the pulleys, resulting in dumbwaiters crashing to the bottom of the shaft.

In the late 19th century, these mechanical dumbwaiters became popular additions in the multi-story homes of the wealthy. One Peoria, Illinois, home, built just a few years after the dumbwaiter’s patent, had one of these devices installed in it. This dumbwaiter and others like it of the period had a few features to ensure their safe operation, like:

Though commonplace in the homes of the wealthy, dumbwaiters also had applications in high rise tenements. Those on the upper floors could safely bring their laundry or groceries up without tripping over the stairs. The added convenience and safety brought by the dumbwaiter helped these early apartment dwellers cope with their cramped city quarters.

Several of these manual dumbwaiters — or at least hints of them — remain in many homes today. If you are lucky enough to have the shaft of one of these old dumbwaiters in your home today, you likely don’t have the dumbwaiter still. As times changed and wooden guide rails and ropes wore out, homeowners converted the dumbwaiter spaces into conduits for wires or cables. Should you choose to restore dumbwaiter service to your home, you may be able to use the existing space when you upgrade to a modern electric model.

Just as today’s homeowners always want to update their homes with the latest appliances, so did people of the early 20th century. As electricity became more common in homes, it eventually would power dumbwaiters, too, though this innovation would not happen until the 1920s.

Dumbwaiters in the 20th Century

In the 1920s, the dumbwaiter would join the electric revolution with the addition of electric motors. These engines allowed for better control of the devices and fewer mishaps from slipped loads. These modern devices appeared in many places, including restaurants and libraries.

One example of a library taking advantage of the electric dumbwaiter is the facility at Duke University. Up until the 1970s, most undergraduate students could not browse the stacks themselves. They would have to request a book from the Circulation Desk. In the 1940s and 1950s, the procedure started with a student identifying the call number of the desired book from the card catalog. They would write this number on a paper and deliver it to the Circulation Desk. The attendant would then put the paper into a pneumatic tube and send it to the proper floor. Additional staff members on that floor would pull the requested book and drop it onto an electric dumbwaiter to deliver the material down to the Circulation Desk. The dumbwaiter, though, had the more appropriate term of booklift. 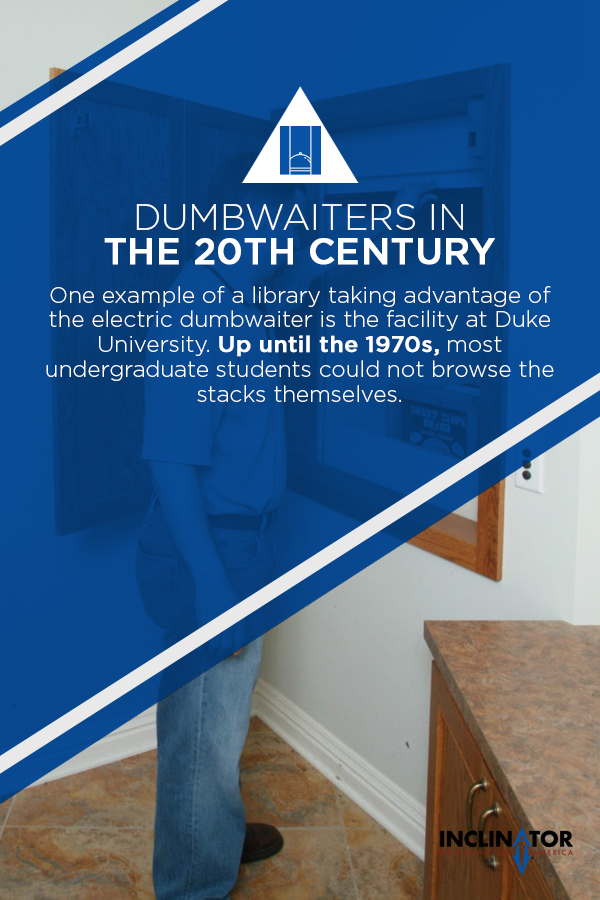 In 1959, Popular Mechanics reported on the return of dumbwaiters, noting that the most popular models installed in new homes at the time had electric motors. The article notes such innovative features of electrically driven dumbwaiters as brakes that only release when power flows to the solenoids. This operation prevents the dumbwaiter from falling in case of a power outage since, without power, the car will not move. Another key safety feature is the safety slack cable. This rope pulls taut to hold the car in case of failure of the main line or cable. While these changes in dumbwaiters seemed futuristic in the 1950s, they are common safety features in dumbwaiters used today.

While the overall operation of dumbwaiters today mimics their predecessors, they offer many more features for safety, speed and convenience that older models lacked.

For instance, today, you can have a dumbwaiter installed in your home that runs on a standard 120-volt current. That low amount of power still can move up to 120 pounds and 35 feet vertically with four stops. You also don’t need to worry about the orientation of your rooms. Modern designs can accommodate openings on up to three sides.

For commercial use in restaurants, hotels and similar places, you can find dumbwaiters that handle up to 500 pounds. These more powerful options require 220 volts for operation, though. With proper installation and use, dumbwaiters can protect restaurant workers in a multi-story dining area from tripping with trays full of food while climbing stairs. By moving the food and empty dishes in dumbwaiters, the servers have their hands free to hold onto a handrail on the stairs. Preventing accidents on the stairs protects both the customers and servers in restaurants, which explains these devices’ popularity in larger dining facilities.

If you don’t want to lug groceries or meals upstairs, bring a modern version of the dumbwaiter into your home. With extra safety features and push-button ease of use, anyone can benefit from having a dumbwaiter installed. Whether you want to free yourself from moving bulky goods between floors or need a way to help you stay in your home, a dumbwaiter can help.

To get started, find your local Inclinator dealer today. 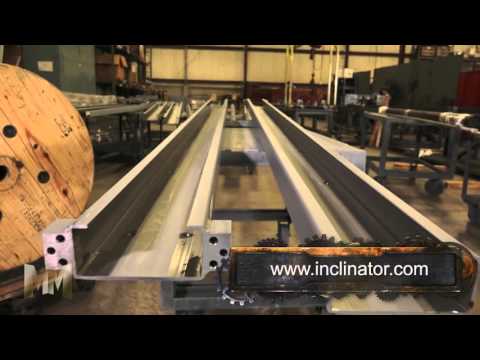 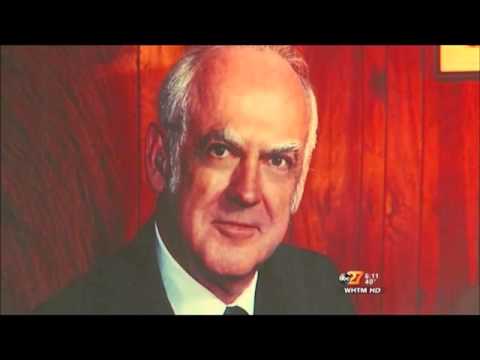 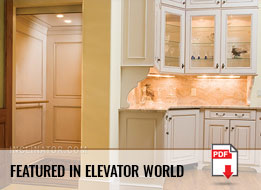 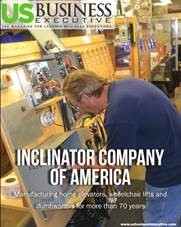